This August I hosted a large military group in Colorado Springs for their 2013 Military Reunion. These military men with their families get together once a year in a different locations of their group choice through out the country. Last year they went to Branson, next year they are going to Washington DC.
The group was close to 200 people and they stayed in Colorado Springs for about a week. We offered them almost 20 different tour options (2-3 a day) which included US Air Force Academy, Garden of the Gods, Cog train to the summit of the PIkes Peak at 14,115 ft, Old Colorado City, town of Manitou Springs, Seven Falls, Cave of the Winds, Indian Cliff Dwellings, Colorado Capitol, and others.
It was a lot of planning and preparation work on my part, but this project ended up being one of the funnest and most enjoyable jobs I've ever done! Many people came and thanked me personally at the end, we exchanged phone numbers  and email addresses, friendships were made, new lessons learned, and some new ideas got planted into my "business head".
I am looking forward for more Military and other groups to serve in the future! 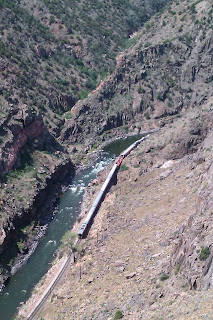 Posted by Colorado Springs Tour Guide at 9:56 AM